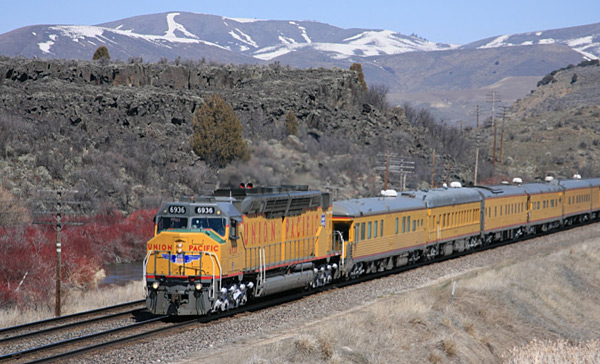 The Shoshone Indians named the area around present day Inkom, “Ingacom”. A reference to the rock formation on the eastern side of town, where one can see the remnants of the “Red Hare”. It was photographed in 1930 after the “ears” had been knocked off by vandals. The local creek was originally called “Rabbit River” but later changed to Rapid Creek as it is called today. The “Red Hare” can still be seen there today and is also in the City’s website logo.

As early as 1889 people were in the Inkom area, the railroad was here along with trappers and hunters. The great rush for homesteads started from Pocatello with the Railroad on June 16, 1902 when 418,000 acres were opened for white settlement. Inkom was part of the Fort Hall Indian Reservation before the land rush. The first settlers lived in tents, dug-outs and covered wagons until they could build homes.

On October 15, 1902, School District No. 46 was formed. Logs were dragged through the snow with horses in single file to construct the first school location on Inkom’s Main Street. It was a one room school house. By 1910, two additions had been built onto the school, making it large enough for three teachers. In 1915, the school on Grant Street was built and was a significant addition to the tiny community. In recent years, it has become the Inkom Bible Church.

Two men, H.A. Witthoft and Theodore H. Gathe, bought the property known as the Inkom town site, from the Sorrells in 1912. They laid out the town by naming the streets (same as they are today) and sold lots for $100.00. The ad for the property read, “Get choice location, secure your lots now, only $5.00 cash down, balance $1.25 per week, no interest.” Telephones were also brought to Inkom in 1912.

A flu epidemic hit Inkom in 1918 and, unfortunately, many died. Area women helped care for the seriously ill. There were not any morticians at the time, so everything was done by the family members. Caskets were home-made and lined by the women of the community.

In 1928, J. Simons and J.B. Mayfield purchased 160 acres of hillside and river bottom that contained vast amounts of Limestone and Silica suitable for the production of Portland Cement. A plant was build and in July 1929, the first bag of Eagle Brand Portland Cement was produced in Inkom. In 1974 over 5 million bags were marketed under the name of Ashgrove Cement. The plant continued to be a major factor in the local economy until about 2010, at which time there was a major decrease in cement manufacturing and a large number of employees were laid off. Currently, the facility is being modified to be a cement shipping terminal only, with no plans of future manufacturing.

The City of Inkom was an unincorporated Village until 1946, at which time, a Mayor form of city government was set up. Inkom is now part of Bannock County. It is also Idaho Judicial District 6, Idaho Legislative District 29, and US Congressional District 2. Our current Mayor is Joel Jolley and the current City Council members are Ernest Moser, Paul Lish, Max Shaffer and Boyd Clark. Present day, City of Inkom has a City Hall, Maintenance Department, Police Department and Volunteer Fire/QRU Departments.

Currently, Inkom has a population of 854 with businesses like postal services, banking, grocery, fuel and vehicle repair that keep our City self-sufficient. There are many other small businesses in Inkom that provide other amenities to area visitors and residents as well.

Inkom also provides great education for kids and has proven to be one of the top Elementary Schools. Inkom is part of the Marsh Valley Joint School District No. 21 which has a population of over 1300 students. School District 21 is also comprised of the following communities: Arimo, Downey, Garden Creek, Lava Hot Springs, McCammon, Swan Lake and Virginia. The school district has four elementary schools, housing grades K-6 with district wide pre-school programs and developmental kindergarten programs. The District has a middle school program for grades 7-8 and one high school for grades 9-12. In addition, there is an alternative high school. The District also provides services for a comprehensive special education program and all of the schools and programs are fully accredited. The Marsh Valley School District employs About 75 Teachers and almost all certified. We are proud of the Marsh Valley School District.

Inkom is surrounded by beautiful mountains and rivers. Inkom is a perfect place to live or visit and provides perfect roads and mountains for avid bikers, runners, skiers/snowboarders, hunters and most anything outdoors. The City’s growth is restricted by these natural barriers, but being a small community is also what provides such great conditions for outdoor interests. During the winter months, one of the nearby attractions is the Pebble Creek Ski Area. Pebble Creek attracts skiers/snowboarders of any skill level. It has been said, “If you can ski Pebble Creek, you can ski anywhere” and it has been proven true by attracting professional athletes to the area.

Idaho State University, located in Pocatello, Idaho, is approximately twelve miles from Inkom. Pocatello, being in such close proximity to Inkom provides many options for movies, restaurants, shopping and other activities. Inkom is close to other tourist attractions and other amenities for it’s residents and/or visitors. The residents of Inkom are very welcoming and friendly. Inkom is a great place to visit and more importantly, Inkom is a great place to live. There just isn’t a better place!